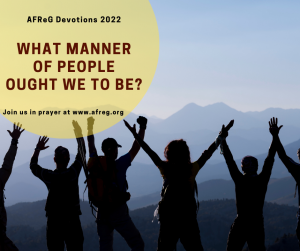 In the Apostle Paul’s 2nd letter to his “beloved son” Timothy, Paul solemnly charges him, in the presence of God and of Christ Jesus who will judge those who are alive, and those who have died, to do the following:

For Jesus will be the “Judge” of those living and dead. This is also whether the situation is favorable, or unfavorable; convenient or inconvenient; welcomed or unwelcomed. It doesn’t matter what the circumstances of the time are, the charge is a very serious one.

As Teachers and Preachers of God’s Word, whether brothers or sisters in Christ, God expects us to deal with the unbelievers or believers in this above manner. We are also to teach and train children in the way they should go, so when they are old, they will not depart from it.

The statement, “blessed, happy, prosperous and to be admired is the slave/servant who the master finds so doing when he comes,” in Luke 12:43. It describes the consequences or rewards of faithfulness, failure, or disobedience in preaching the Gospel of Jesus Christ to people, in season and out of season.

It is a challenge for some people to preach to strangers or people they know, whether someone wants to hear the message or not. I know I have at times shied away from preaching to strangers. It is so serious, as an act of instruction from God, that failure to act on it has consequences for the believer and those we are wanting to reach.

The manner of people we ought to be, is the charge on us as Christians/pastors/leaders, etc., is to recognize our call and to be fervent in carrying it out, no matter what. Luke 12:44 describes how blessed the servant/slave will be when the Master comes and still finds us working. We are not just slaves or servants, but sons and daughters. Therefore we are not to give up, fall back, slack off or turn back from our calling. People are waiting for us, but in the meantime, they are dying and falling into hell every second. Will they one day ask us why we didn’t tell them? Are we about God’s business or just our business, in whatever “office” we are in?

You know, my older sister just died after a massive bleed on the brain, where she was said to be brain dead. Initially, she was on life support, but after a while began to breathe on her own. Her only medication was continued morphine. I knew she had no interest in Jesus anymore, but I still wanted to give her the opportunity to accept Christ. While alone with her, on two occasions, I spoke to her (hearing is the last sense to go) and asked her to invite Christ into her life. I helped her say the sinner’s prayer. Whether she did or didn’t I will not know until I get to heaven. Hopefully, she made it.

This site uses Akismet to reduce spam. Learn how your comment data is processed.