The African Forum on Religion and Government (AFReG) calls on all Christians to increase our prayers in this era of COVID-19. This week, Tuesday, June 23, 2020, our theme is “Freedom and Human Rights.”

The Bible frequently addresses issues of Freedom and Human Rights.

In Genesis, God created Adam and Eve free. They lost their liberty when they allowed sin into their lives, falling to the devil’s temptation. Pain, discrimination, loss of rights, and death became daily realities.

In Exodus, after enduring 400 years of slavery (a time without respect of rights and freedoms) the Jewish people called on God. He intervened against Pharaoh and his people and delivered the Jews from captivity through Moses’ leadership. When they left Egypt, it was the symbol of political independence and economic prosperity.

On June 30, the Democratic Republic of Congo will celebrate 60 years of independence. Many Africans countries were freed from colonialism and regimes without freedom and respect for human rights. The problem is that in many African nations, even all those years after our independence, our situations are not much better: political rights, economic rights, social rights, security, hunger, roads, etc. As an AFReG creed, we need transformational leadership to achieve new independence with freedoms and full rights (from a biblical view).

Jesus Christ, our Savior and Lord, came into the world with the answer to the questions of liberty and human rights. When He spoke about His mission, He announced that He came: to preach the Gospel to the poor, to heal the broken-hearted, to proclaim liberty to captives and recovery of sight to the blind, to set at liberty the oppressed, and to proclaim the acceptable year of the Lord.

Jesus’ program is holistic (touching body, soul and spirit of all humans, all races, citizenships, ethnicities, tribes, regions, etc.). His mission is to restore the liberties and human rights lost in Eden.

When we saw the brutal death of George Floyd (black) at the hands of police (white), we saw racism at a primary stage, showing a world empty of liberties and lacking respect for human rights.

Jesus came as a substitute to the regime of sin. Crowds of people claiming equality and abolition of discriminations, shows the hunger the world has for justice even as religions and governments fail.

Beyond progress of new Constitutions, Laws and International Conventions on the issues of freedom, human rights, prevention of genocide (crime based on natural differences), there is an empty place which must be filled by Jesus and His mission.

After centuries of slavery against black people and years of colonialism, the world hasn’t changed enough in these matters. The answer remains Jesus and His message of hope. He asks for justice for all people; all nations are His inheritance (Psalms 82).

In John 8:31-35, Jesus debated with Jews about Freedom and said: you will know the truth and the truth will set you free; whoever sins is a slave of sin; if the Son sets you free, you will be free indeed.

It is time for the Church to be the light of the world; His peacemakers and ambassadors, bringing reconciliation between the world and with God. Let us live by teaching and showing love for God, our families, communities, churches, workplaces, our enemies, in the fields of religion and governance resulting more and more in reducing racism, discriminations, sins of all consequences.

The more we take responsibility to talk openly and act against evil, the more evil will be decreased. Finally, as evil comes through sin, at the end of times, we will have final victory on the last enemy, the death as sting of the death is the sin.

After the victory over death, we will recover all freedoms and rights lost in Eden. Beyond that our full freedom and all rights from Jesus’s sacrifice, we will be with our Lord eternally, without any kind of discrimination.

Forgive us Lord where we have not looked at other people through Your loving eyes.

Where we have not in humility considered others as better than ourselves.

Where we have judged others.

Where we have failed to be salt and light to bring the Kingdom of God to bear in our part of earth as it is in heaven.

That You created man in Your own image and likeness to reflect Your glory and have dominion over all the created order on earth.

That before You, God, there is no Greek or Jew, circumcised or uncircumcised, male or female,

Barbarian, Scythian, slave or free, but Christ is all and in all (Colossians 3:11).

That through Your death and resurrection, grace was made available from You to us, so that even in the harshest of oppressive situations, we can persevere and thrive.

For the example of Jesus Christ and His Spirit’s power in us to overcome the tendency to bitterness and hatred toward the oppressor.

That there is a day coming in the new heaven and new earth, when all injustices, bondages, prejudices, and discriminations with their resultant consequences, will be no more.

Focusing on Business and Economics in this week’s Webinar on June 24, 2020, we pray for God’s anointing on our presenters Mr. Pete Ondeng, Ms. Georgia Simpson, Dr. Rogers Dhliwayo and Bishop Ngwiza Mnkandla, and for Dr. Daryl Jones and Mrs. Martha Stevenson-Jones in their role as moderators. We pray for meaningful and life-impacting engagement that will help all those who participate and pray against any technology glitches, confusion of any kind and/or lethargy in follow-up.

We declare as Africans and Africans in the Diaspora that Christ died to set all people free from sin which separates everyone from God and from one another.

AFReG Call to Prayer The African Forum on Religion and Government (AFReG) calls on all Christians to increase our prayers in this era of COVID-19. This week, Tuesday, August 4, 2020, our theme is “Serving God with Excellence”. Excellence means greatness—the very best. … Excellence is a quality that people really appreciate, because it’s so hard to find. Excellence is

The African Forum on Religion and Government (AFReG) calls on all Christians to increase our prayers in this era of COVID-19. This week, Tuesday, July 28, 2020, our theme is “Justice for all”. As Christians, we love our walk with the Lord, our worship, the personal times of devotion, our evangelism and other forms of

The African Forum on Religion and Government (AFReG) calls on all Christians to increase our prayers in this era of COVID-19. This week, Tuesday, July 14, 2020, our theme is “The Dignity of Labor”. The Dignity of Labor The opening chapters of Gods revelation to mankind present Him as a worker. In Genesis 1, He

The African Forum on Religion and Government (AFReG) calls on all Christians to increase our prayers in this era of COVID-19. This week, Tuesday, July 21, 2020, our theme is “Responsible Interdependence”.   Main Text: Romans 12:9-10 A basic definition of Interdependence suggests mutual reliance on one another. Broadly, this could refer to people, animals, 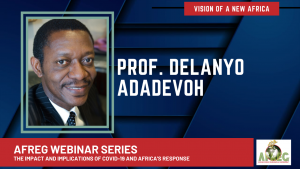 Prof. Delanyo Adadevoh, AFReG Chairman, Founder and President, International Leadership Foundation began his presentation by quoting Jesus Christ who declared, “You will know the truth and the truth will set you free” (John 8:32). He continued, “As Africans, a new self-definition will set us free. We need to pursue the truth of who we are 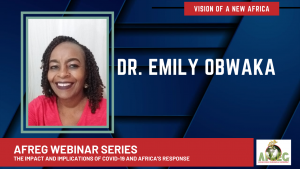 Vision of A New Africa 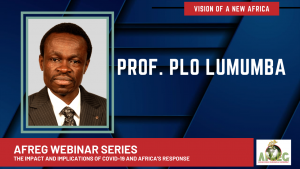 There is a great Africa beyond Covid-19!

Prof. PLO Lumumba, Immediate Former Director and CEO, The Kenya School of Law, spoke from his heart and mind challenging participants to think through several thought-provoking questions and statements.  “Is there a possibility without taking away the science that God is sending us a message? If you want to doubt me has there ever been